I have a question.

How do you regard the country in which you live and your place in it?

Living in Scotland, its a bit different, we're sort of a country within a country. Although technically (and historically) the UK was a union between two countries, over the years, the idea of being 'British' has been hammered home with vigour. Putting that to one side though and going back to the question...

You (or your parents) pay your taxes, maybe volunteer some time and generally do your bit to make the country a decent place to be, its an investment. You vote for the parties that best suit your aspirations, not just for you but for your kids - and if you're at all civic-minded - anyone else travelling in the wake you leave behind. We make a compromise, we understand individually we can't change the entire world but perhaps, if we improve our little bit of it -  it'll spread and rub off.

So, what about it then? Scotland, you and/or your parents have worked hard to invest in it, to make it habitable. You've studied hard so you can make your way in it - and why not; it is yours after all isn't it? 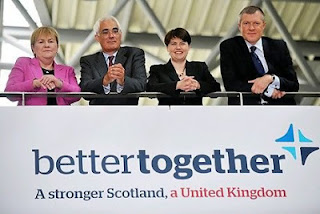 Turns out we're only renting Scotland from Westminster, the people in the picture above are the current letting agency staff. In all the debate, the resounding and repeating mantra has been; 'Its not yours, you can't have it.'

Passport: A symbol of citizenship, its your internationally recognised label. According to Theresa May (Tory Home Secretary) its not yours. You've paid for it (£72.50) and you've paid your share of the costs of its production (via the Identity & Passport Service funded out of the tax you pay.) You're also paying for the embassies and consulates in countries to which you can travel; but it and they are not yours, you're just renting.

Currency: The cash in your pocket, the money you earn. Scotland has been using it for over 300 years, our industry has contributed to its strength (such as it is now but never-the-less...) The Bank of England was founded by a Scot, we print our own notes and are responsible for generating more of it in terms of tax than the rest of the UK - we pay our way with it. But its not yours. According to George Osborne, current Chancellor of the Exchequer and ex-towel folder, it belongs to the UK, of which we are an integral and much loved part - except we can't be - because if we chose to leave, we wouldn't be allowed to use it.

Armed Forces: We rent this too, its not yours, in fact Scotland is so inept, we'd need to rent a foreigner to run our armed services on independence. Phillip Hammond, current Secretary of Defence tells us divvying up UK armed forces - toward which we pay handsomely - 'lacked coherence'. What actually lacks coherence is why we'd spend more money and get less as part of the UK rather than spend less money and get more as an independent country. (Scotland's share of the defence bill on a per head of population basis in 2011 was £3.62 billion, actual spend in Scotland is below £2 billion, in 2008 it was as low as £1.57 billion, subsidising the rest of the UK to the tune of £2 billion.) Lets not forget Trident, parked less than 40 miles from Scotland's largest population centre and costing us £163 million every year.

SNP policy (for example) is to spend £2.5 billion on defence - more than is currently spent in Scotland and less than our current share of UK defence spending.

Welfare & Pensions: I think you can guess where this is going, correct - its not yours. I never understood why pensions and welfare were conflated, for what its worth, I take the view, if you've worked for most of your life; your pension isn't a welfare benefit - its money fairly and squarely owed to you. Also, in terms of UK government, pensions aren't a benefit; they're a liability. There is no pot of cash earning 5% pa in to which Scotland has paid, we won't be asking for our per-head share of it because it doesn't exist. Pensions are paid on a pay-as-you-go basis out of general taxation and borrowing. We do however rent the infrastructure, it goes without saying, even although there are 10,000 people working for the DWP in Scotland for which we pay our share - it & they are not ours, we can't have any of it if we vote yes in 2014.

Oil & Gas: In the face of every normal practice, in contradiction of all known examples; if Scotland decided as a country it wanted to govern itself - its possible that resources contained within its borders wouldn't belong to it. Obviously none of us have contributed to the wealth of Oil & Gas beneath our land and sea, we have geology and history to thank for that; you would think by any normal measure of the idea - that it sits within our borders - it would belong to us. Well it doesn't - its not yours. As you well know, when news readers are talking about Wales, Northern Ireland and England, they also temper any fiscal statement with the words; 'if you take a geographical share of [insert resource or tax income] into consideration.' Why wouldn't you include oil & Gas income in Scottish figures? Oh aye, I forgot - its running out.

The EU: I'm not sure how this works but bare with me. Our share of EU membership isn't ours, it belongs to the rest of the UK - which includes us - because as we all know, we're a part of the soul of one-nation-UK - a UK which would be much diminished without Scotland, which is probably true, but not in the way Westminster representatives would have us believe. It goes without saying, your membership of the EU (whether you want it or not) is not yours. I've deliberately linked to a dodgy Telegraph article, the headline reads; 'Independent Scotland 'would have to 'apply from scratch to join EU''. The article then goes on to undermine and disprove it's own headline by comparing Scotland with Croatia. Scotland is already in the EU, it already adheres to EU laws and policies, comparing it to Croatia - which has never been in the EU so did have to apply 'from scratch' - is fatuous.

My point is, you think this is your country, but it isn't. At least not according to the Union - its out on loan to you. All the infrastructure, the bureaucracy and functions of state for which you pay - are not actually yours. In Scotland, we're all second class citizens - tenants if you prefer - living in a house we don't own but have been paying for and investing in for the past 300 years.

All the tax you pay, the tax your parents and grand parents have paid. All the effort you put and will put into your future in Scotland won't be yours - if it truly was - if you decided to leave; you could take your share of it with you, couldn't you?

In a bizarre exercise of state-based auto-eroticism, our Prime Minister has ordered - and I'm going to be charitable and call it - a commemoration of the start of WW1. Normally the end of hostilities are cause for commemoration, not the start. Unfortunately, the 150,000 Scots who died in The Great War and the 50,000 who died in the Second World War - according to what those arguing for the union are saying - did so for nothing because none of what they saved was actually theirs to begin with.

The temerity, the cheek, the sheer brass neck of it. Scotland is and has been an integral part of the UK; adding to it, paying for our share of it - sometimes more sometimes less - and now, finally seeing the inequity of it; we are seeing the truth of Scotland's position through the eyes of British Unionists.

Its not yours. But, it could be - completely and totally with all its advantages and challenges - if you put a cross in the correct box on the 18th of September 2014.